The Isle of Skye 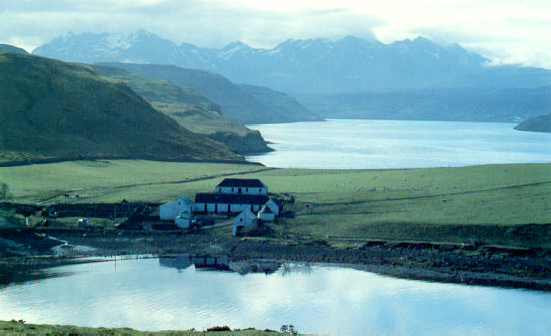 As well as McLeod and McLeod septs McAskill and Nicolson our known Skye ancestral names are McIntosh, McKenzie, McLean and Stewart (clans in their own right); McSwain (a sept of Clan McQueen) and Murchison (a sept of Clan McKenzie).

On Kenneth Stewart and Ann Nicolson (the parents of my great-grandmother Susan Stewart), married in the township of Holm, Parish of Portree, Isle of Skye in 1805. Kenneth had previously married Marion McLean and their only child Donald was born at Holm in 1802; presumably Marion died in childbirth. Ann probably had about a score of opportunities to do likewise but survived all her many pregnancies and outlived Kenneth. Though their marriage took place in 1805, about the year in which their oldest child (another Donald) was born, the next birth we know of was of their daughter Margaret in about 1813. It is unlikely that they had no children in the eight years between 1805 and 1813; we know of eleven born after Margaret, one of them yet another Donald. It was not at all unusual for a Highland family to simultaneously include three living sons with the same name. In the case of these three Donald Stewarts, it is likely that the first was called Domhnall Mor (Big Donald), the second Domhnall Beag (Little Donald) and the third perhaps Domhnall Bhain (Fair-haired Donald). Ann’s father was certainly Donald Nicholson and Kenneth’s was very probably Donald Stewart.

Ann or Kenneth may have had ‘good connections’. In the 1841 census Ann and eight of their children were living with Kenneth, a crofter (tenant farmer) of an unstated number of acres. In 1851 Ann was a widow living with seven children and a grandson and is described as a Farmer of 9 acres, a comparatively large holding for the place and time.

Some of the Scottish pioneers who bore these mellifluous names were maternal ancestors of my father Norman McLeod. His mother Elizabeth (Bessie) Murchison had a mother Mary McKenzie, and Mary had a mother Christina McAskill. Bessie was born in Australia, but her mother and grandmother were both Gaelic speaking emigrants from the Isle of Skye.

Old church records of the Parish of Bracadale on Skye show that Christian McAskill, the daughter of John McAskill and Isobel McLean, was baptised in the village of Struan on 15 March 1806. Christian was apparently the second daughter of a large Highland family and had at least eight brothers and sisters. During her long life she was variously known as Christina, Christy and Chirsty. When about eighteen she married Charles McKenzie, a son of Donald McKenzie and Euphemia (Effy) McIntosh.

Charles and Christina carried on the tradition of large families, and had nine children that we know of. Mary McKenzie was the first-born. In 1854 she was married on Skye to Malcolm Murchison, just before she left with him for Geelong, Victoria on the sailing ship Hornet – only about a month after the Edward Johnston had departed for Portland with its cargo of emigrants from Skye, Raasay and other Hebridean islands.

The influx of our ancestors to Australia from the Isle of Skye did not end with the 1854 arrivals of the Edward Johnston and the Hornet. In 1855 Charles McKenzie and his wife Christina sailed on the Switzerland to South Australia. With them were their children Donald (17), John (12), Anne (9) and Isabella (4). Though their first port of entry was Adelaide, all except perhaps Anne finished up in Victoria. Christina McAskill’s brother John had emigrated earlier with his wife and three children, one of whom (Catherine, aged two) died on the typhoid-stricken Priscilla. A total of forty-one perished on that ill-fated voyage.

The preceding chapter told of how Norman McLeod, his wife Susan and their four young children were on the Edward Johnston; also on that ship were the over-sixty-year-olds Neil and Betsy (Nicolson) Murchison, the parents of Malcolm Murchison and the grandparents of young Ruairidh McLeod’s future bride, Bessie Murchison.

With Neil and Betsy were four of their children, Catherine (30), Donald (29), Kenneth (24) and Mary (21). With Catherine was her husband Ewen McDiarmid and their four children, Donald (10), Mary (7), John (3) and Christy (1). With Donald was his wife Catherine McLure and their four year old son Kenneth. Neil and his son Kenneth both found employment at Crawford, his son Donald went to Wannon, his son-in-law Ewen went to Roseneath, and his daughter Mary went to work in Portland.

Ian Black’s publication Early Byaduk Settlers tells how Donald and Kenneth, with Peter Aitken (who married Donald’s daughter Christina) and Duncan McDonald (Kenneth and Margaret McGillivray’s daughter Betsy married an Alexander Duncan McDonald) selected land at Warrabkook in 1865 and lived there till the late 1880s, when they moved to the Riverina. The number of emigrant relations of Bessie Murchison mentioned on this page testifies to the extent of the displacements arising from the Highland Clearances.

On the following map I’ve shown the townships which in 1841 were the homes of the Skye ancestors I’ve referred to and the localities of some important family events. The parishes and their boundaries are as they existed in 1841; by 1851 the Parish of Kilmuir had been subsumed into a new Parish called Stenscholl. The three northern peninsulas are still known by their old Norse names of Duirinish, Vaternish and Trotternish; those latter two contained lands which once belonged to McLeod of Raasay. By the mid-19th Century much of Skye was MacDonald territory. The McLeod of McLeod Estate consisted of the Parish of Bracadale and neighbouring parts of the Parishes of Duirinish and Snizort.

WHERE THEY CAME FROM 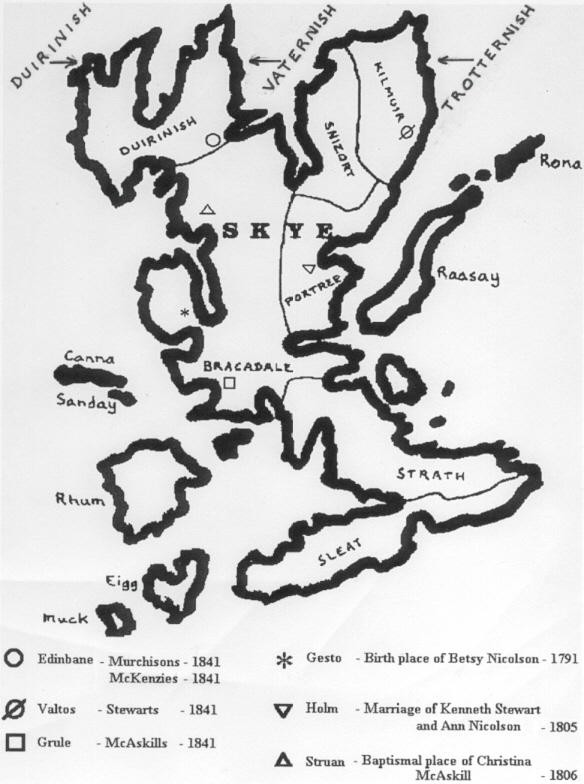 This chapter is concluded with a map showing south-west Victoria and its Counties as they were a few years after our pioneering forebears arduously began establishing themselves in the area. Redruth, just across the road from the Wannon Falls and where Christina (McAskill) McKenzie died in 1891, is shown on this map; only a trace of the former village now remains and this is the only map on which I have seen a reference to it. If your eyes are keen you will see that just above and below the County name Normanby I have written in ‘Condah’ and ‘Myamyn’, the respective birthplaces of Norman McLeod and Sarah May Malseed, without whom this book could not have been written.

WHERE THEY WENT TO 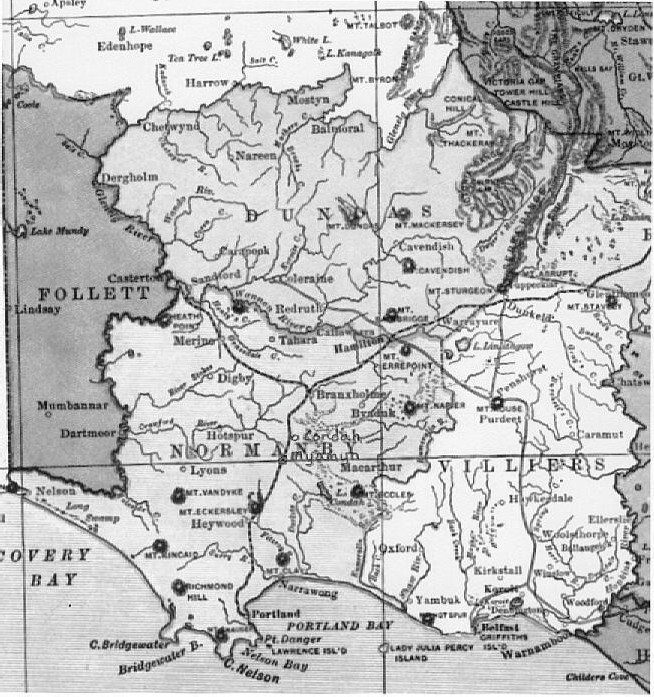 This map is from www.ballaratgenealogy.org.au, a most worthwhile Victorian genealogical site