This year’s event was about bringing to life the stories of the granddaughters of the original immigrants, Norman McLeod and Susan Stewart.

Why focus on the granddaughters?

We know something of the children of Norman McLeod and Susan Stewart but less of some of the grandchildren, especially the women. These women were born in the period 1878 – 1903. The choices available to them were limited in comparison to today. At the time of their birth it was possible for them to attend school. They could vote in Commonwealth elections after federation (1901) and in state elections from 1908 (provided they were 21). Women were admitted to universities in Australia from the late 1800s but of course the numbers attending were very low. Even by 1949 women made up less than 18% of undergraduates at university.

There are twenty granddaughters but only nine of them married. Has this anything to do with the time and conditions in which they came to marriageable age? Marriage was considered important for women at this time and their adult identities were largely forged through their husband if they married. What was it like to be unmarried (that horrible term a ‘spinster’)? Careers were not something woman had at that time. So what kind of lives did they have? 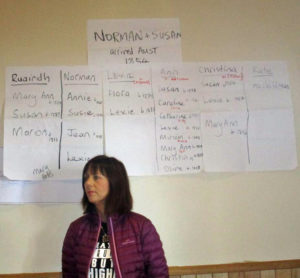 along with general discussion of the content. A five meter long chart of the descendants of Norman and Susan was also on display for the group to write on to correct or add details.

After lunch at the Green Hills the participants headed to Wallacedale via a back route down McCallum’s Road to view the location of Tot’s property. A stop was also made at Branxholme for coffee and “Scotty cake” (courtesy of Carolyn Hansen) before visiting the cemetery.

Some of those attending brought bunches of flowers from their gardens to place on the graves of women from the morning’s conversations. Flowers were also put on the grave of Annie McLeod, the great aunt of Maryanne, Elizabeth and Michael, and also on the grave of Tot’s brother Rod’s granddaughter, Roslyn Nolte, who was killed in 1971 at age fifteen. 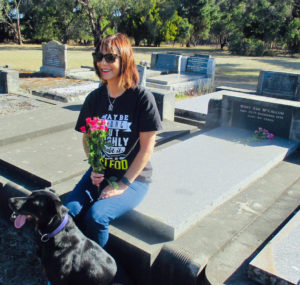