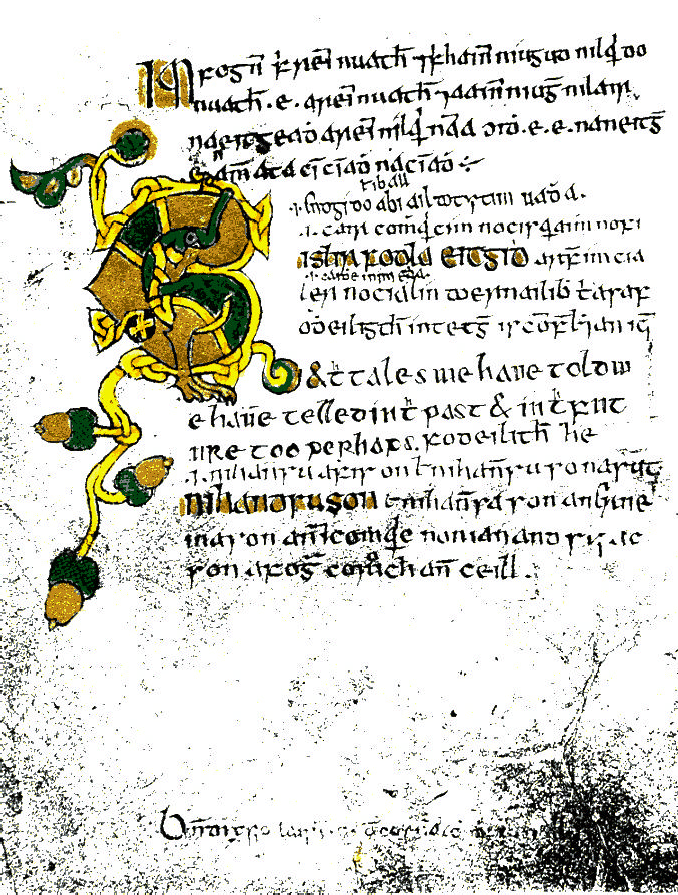 On an island near Skye, lies an enchanted loch. Here a water-horse lived who was so terrible that everyone feared he would enter the village and destroy them all. And so it was that an old man in the village who knew of such things advised his neighbours to raise a bull, one to each household, and never let it out until it was needed. For many years, the village was safe. Women washed their clothes at the loch in pairs, for everyone knew that the water-horse would only strike if you ventured to the loch alone. And every household had a bull, never let out in the event that it would be needed. But so it was, one year, that the villagers had become a wee bit complacent about the water-horse, and women began to be a little less careful about doing their laundry in pairs. And one day, for whatever the reason, a woman washed alone there, and when she finished she laid down on the banks of the river and slept there. The sun was high in the sky and she was warmed into a deep slumber. When she woke she saw a magnificent man standing there, the sun glinting on his golden hair and lighting his clear blue eyes. He spoke to her then about the fineness of the afternoon, and she spoke back.

“You must be very tired after all that washing,” he said kindly, and the woman blushed, for the men of the island never cared much about the tiredness of women, or about the washing.

“I am indeed” she stammered.

“Do you mind if I join you there?” He smiled at her. “Because I am tired myself.”

“Oh, no” she said sweetly, and made room beside her.

Now that fine young man sat down beside her, and then spoke again.

“Do you mind if I lay my head in your lap?” he whispered, and the woman flushed again and shook her head.

And so it was that this young woman was sitting by the sunny banks of the loch with the head of a handsome young man in her lap. And as she gazed down, hardly believing her good fortune, she noticed sea-dirt in his hair, and weeds, and bits of water-moss. And only then did she notice his hooves, which lay crossed in slumber.

And carefully, ever so gently, the woman took from her washing bag a pair of sharp scissors, and cutting a hole in her coat where the head of the water-horse lay, she slipped out from under him, leaving a bit of her coat behind.

There was a neighing behind her, and the sound of hooves on gravel, and she ran all the faster, calling for help.

Now the old man heard her first, and he called out to his neighbour, whose bull was the closest. The bull was Tarbh na Leòid, and he was a fierce creature, all the more so for being kept inside all his life.

And so the bull was let loose, and he threw himself at the water-horse and there ensued a fight so horrific that the villagers could hardly watch. And it carried on for hours, and then days, and finally the bull beat that water-horse back to the loch, and they both disappeared.

The woman returned to her home, and she laid down on her bed, never to rise again.

Nor did the bull or the water-horse, although it is said that the horn of Tarbh na Leòid rose to the surface of the water one fine day, many years later. It’s still there, they say, guarding the path to the loch of the water-horse.

The following is an extract from The Journal of a Tour to the Hebrides with Samuel Johnson by James Boswell. It is part of a report of a guided walk by Boswell on the Isle of Raasay.

Before we reached this mountain, we passed by two lakes. Of the first Malcolm told me a strange fabulous tradition. He said, there was a wild beast in it, a sea-horse, which came and devoured a man’s daughter; upon which the man lighted a great fire, and had a sow roasted at it, the smell of which attracted the monster. In the fire was put a spit. The man lay concealed behind a low wall of loose stones, and he had an avenue formed for the monster, with two rows of large flat stones, which extended from the fire over the summit of the hill, till it reached the side of the loch. The monster came, and the man with the red-hot spit destroyed it. Malcolm showed me the little hiding-place, and the rows of stones. He did not laugh when he told this story.

The Malcolm who told the story was Captain Malcolm McLeod of Eyre and Brae, whom we meet again in the Clan McLeod and Isle of Raasay chapters.

At the end of the game the king and pawn are put away in the same box.