For many years the popular tradition has been that Leod, the progenitor of the Clan McLeod, was the son of Olaf the Black, the Norse King of Man. This version of the genealogy of Leod was originally put forward by the Marquess of Queensbury, whose mother was a McLeod and who wished to be able to claim descent from a Royal Family. The Marquess is more renowned as the nemesis of Oscar Wilde and as the codifier of the ‘Queensbury Rules’ of modern boxing.

Referring to the tradition that McLeods were descended from Olaf the Black, an “extensively revised” edition of a Clan McLeod Heritage booklet affirms that . . . there is equally strong reason to believe that, in the male line at least, they belonged to the ancient Celtic inhabitants of the country. This is consistent with ancient Irish genealogies, one of which traces the ancestry of Leod back to . . . Lair, (i.e. mare), and it is she who came out of the fairy mansions in the shape of a mare, and bore three sons who had issue. (Please note that in this case the word “mare” means a spectre, as in night-mare – it does not mean a female horse). The ancient Irish view is itself consistent with a largely whimsical Pedigree Chart that my son Neil drew up for me about 50 years ago, which showed the Clan descending from the union of the Celt Leod and the Norse princess Ealga of the Fair Locks. The acceptance by modern scholars of a Celtic ancestry for Leod is much to be desired − it would put to rest the arrant nonsense that his name is a corruption of the Norse word ljot, meaning ugly.

There is, however, no doubt that Norse genes are part of the heritage of the McLeod Clan. Old Irish annals record Viking raids on Skye dating from 794. Until 1266, the Hebrides were under Norwegian rule, not Scots. Some Raasay place names are of Norse origin − indeed, ay is Norse for island.

Though whether he was of Celtic or Norse descent is in dispute, there is little doubt that Leod lived in about the 13th Century and had two descendants, Tormod and Torquil, who became the first Chiefs of the two main branches of the McLeod clan. I have used the term “descendants” because whether Tormod and Torquil were the sons or later progeny of Leod is now a matter of scholarly debate. (Incidentally, the Anglicized forms of the Gaelic names Tormod and Torquil are Norman and Colin.) Tormod became the titular progenitor of the McLeods of Harris and Torquil of the McLeods of Lewis. In the early part of the 16th Century Calum McLeod IX (signifying the ninth chief of the Clan McLeod of Lewis, not the ninth by the name of Calum) gave to his younger son Calum Garbh the overlordship of the Isles of Raasay, Rona and Fladda (the last two are small islands adjacent to the north of Raasay), parts of the Scottish mainland adjacent to those three islands, and lands in Vaternish and Trotternish on Skye. Thus was created the Clan McLeod of Raasay, which became an independent branch of the Clan McLeod of Lewis.

Broadly speaking, contemporaneously and not unexpectedly, Lewis was the domain of the McLeods of Lewis and Harris that of the McLeods of Harris. Small areas of Lewis were under the control of the Clans Macaulay and Morrison. The Isle of Skye was split up between the Harris and Lewis (Raasay) Mcleods, the McDonalds of Clan Donald and the McKinnons and McQueens. That part of the Scottish mainland which surrounds Glenelg was McLeod of Harris territory.

The preceding description of clan overlordships in the early 16th Century is drawn from Richard Sharpe’s Raasay – A Study in Island History and Frank Adam’s The Clans, Septs and Regiments of the Scottish Highlands.

The legitimate line of McLeod of Lewis petered out late in the 16th Century and after much bloody dispute between various unprincipled and ferocious claimants its territories on Lewis were confiscated by James VI of Scotland. These Lewis territories eventually became an estate of McKenzie of Kintail. Highland Papers Vol 3 quotes an old report that . . . the Clan Torkil in Lewis were the stoutest and prettiest men, but a wicked bloody crew, whom neither law nor reason could guide or model, destroying one another, till in the end, they were all expelled and the Mackenzies now possess it.

Our known Highland ancestors from the Isle of Skye include McAskills and Nicolsons, both septs of the McLeods of Lewis. We have no evidence of any ancestral link to the McLeod of Harris Clan, but that is not to say that no such link exists. 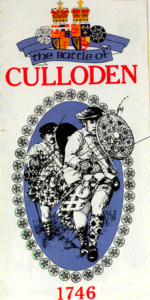 The independence of the McGillichaluims (as the Chiefs of the McLeods of Raasay termed themselves) from McLeod of McLeod was demonstrated in 1745 when McLeod of Raasay joined the Jacobite Rising. McLeod of Dunvegan, on the other hand, had decided that his clan had suffered overmuch in previous ill- fated campaigns on behalf of the House of Stuart and pragmatically declined to participate.

On the next page, above the name of its author, Ruairidh H MacLeod, is an extract from a publication obtained at the site near Inverness of the infamous Battle of Culloden, the last of the many battles fought over many centuries between Scottish and English armies. Culloden saw the end of a campaign to restore the Stuart line to the throne of the United Kingdom of Scotland and England. That ill- fated insurrection was called the Jacobite Rising and was led by Charles Edward Stuart, the grandson of the deposed James II of England (James VII of Scotland). Charles Stuart was known by his supporters as Bonnie Prince Charlie and by his foes as The Young Pretender, the latter appellation implying that his claim to be the rightful occupant of the throne was baseless. 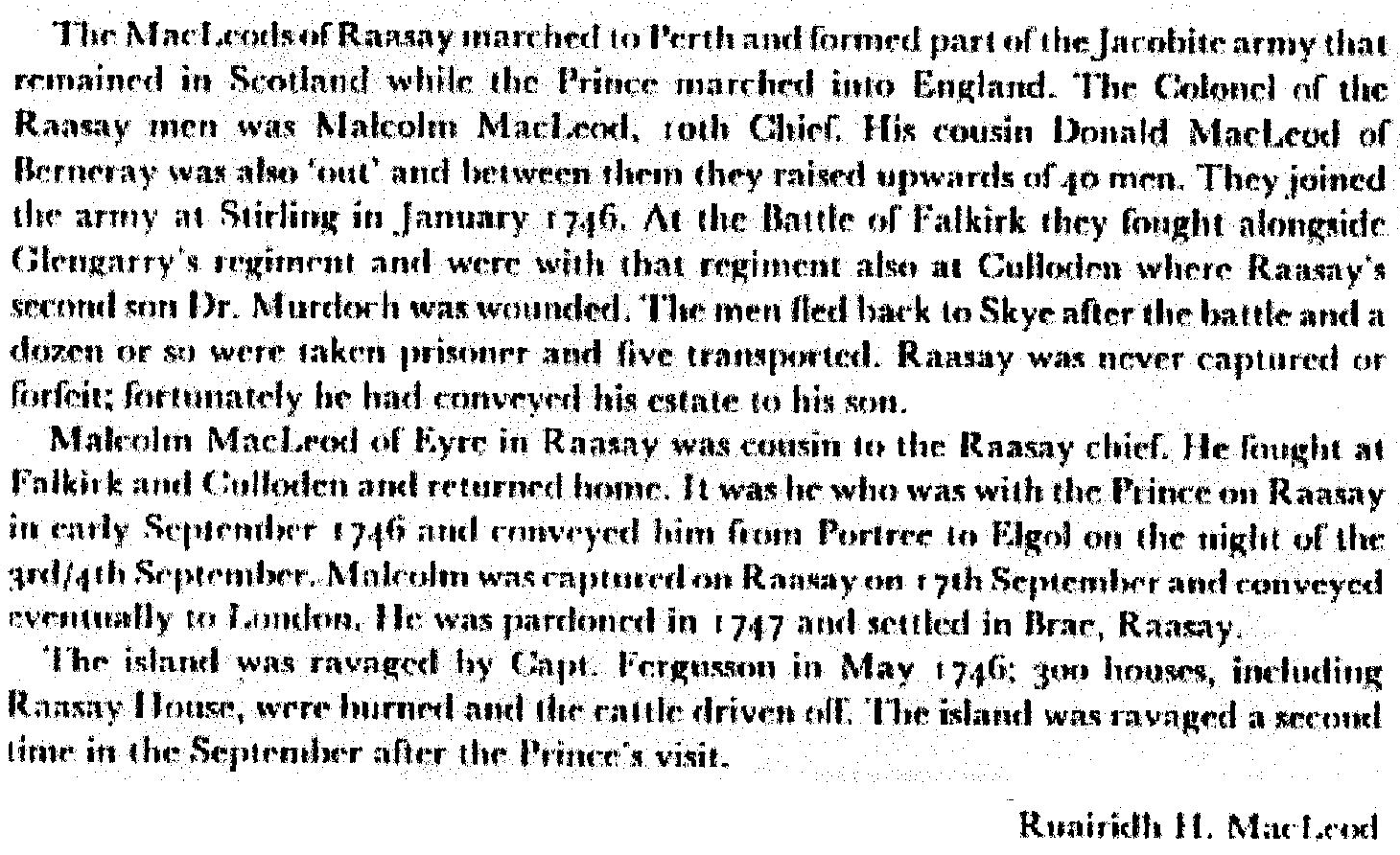 The above quote appears to considerably understate the extent of the support given to Bonnie Prince Charlie by McLeod of Raasay. After his visit to Raasay (of which more later) Dr Samuel Johnson wrote . . . the old Laird joined some prudence with his zeal, and when Prince Charles landed in Scotland, made over his estate to his Son, the present Laird, and led an hundred Men of Raarsa into the field, with officers of his own family. In those days, one hundred men would have been a goodly proportion of the population of Raasay. Today, the entire population of the island is less than two hundred.

At the Battle of Culloden the Highland army was comprehensively defeated by the numerically superior and better armed forces led by the Butcher of Cumberland. Not only was a battle lost; so also was a culture and a country.

The short account by Ruairidh H. MacLeod of the Raasay involvement with the Jacobite Rising concludes with an abbreviated report of the retaliatory sacking of Raasay. A fuller account is given by John MacLeod in his book Highlanders – A History of the Gaels.

Raasay, for two nights only, had sheltered the prince on his desperate flight after Culloden. So Raasay was pacified with particular zeal. Its MacLeod chief had had the sense to sign his estates over to his son before he left for the Jacobite cause; in law, then, the lands were not forfeited. But his fine house was destroyed. For weeks the work went on. Every house, hut and hovel on the island was levelled. Every beast and bird of livestock was killed or removed. Anything of the least value was taken. A blind girl was raped so savagely, by two soldiers, that she lost her reason. Before leaving, the Hanoverians destroyed every boat.

James Boswell in The Journal of a Tour to the Hebrides with Samuel Johnson makes much of the Malcolm McLeod of Eyre mentioned above. Malcolm was an officer of the McLeods of Raasay contingent at Culloden, and later became Tacksman of Brae on Raasay. Tacksmen were often closely related to, and held their lands directly from, the Chief of a Highland clan. They collected rents from their sub-tenants and paid rents to their Chief.

The assertion by John McLeod that . . . the Hanoverians destroyed every boat . . . is not quite right. Boswell tells of how Captain Malcolm McLeod had saved two boats from destruction by concealing them somewhere on the island. It was in one of these boats that Malcolm brought Bonnie Prince Charlie to Raasay from Skye, where he had been concealed by the famous Flora Macdonald. Boswell gives a lengthy account of Malcolm’s daring and successful mission; it is obvious that Captain Malcolm made a huge impression on the man from Edinburgh. Here is how Boswell, immediately after their first meeting on 8 September 1773, described that colourful character Malcolm McLeod of Brae.

He was now sixty-two years of age, hale, and well proportioned, – with a manly countenance, tanned by the weather, yet having a ruddiness in his cheeks, over a greater part of which his rough beard extended. – His eye was quick and lively, yet his look was not fierce, but he appeared at once firm and good-humoured. He wore a pair of brogues, – Tartan hose which came up only near to his knees, and left them bare, – a purple camblet kilt, – a black waistcoat, – a short green cloth coat bound with gold cord, – a yellowish bushy wig, – a large blue bonnet with a gold thread button. I never saw a figure that gave a more perfect representation of a Highland gentleman.

A word on the sometimes contentious issue of whether the name should be spelled McLeod or MacLeod. I am indebted for the following to Professor Neil McLeod, who is known world-wide as an arbiter on matters Celtic.

In Gaelic and in Irish, mac means son and the name of a ‘son’ (meaning a descendant) of Leod was Mac Leòid. Celtic scribes customarily abbreviated the Mac to Mc, with the small c being originally placed not beside the M, but above it. In later manuscripts the small c was placed beside the M but in a raised position and with a horizontal line or two under it to indicate that it had once belonged on top of the M. It was in just that way that my siblings and I were taught by our parents to write our names; their convention was to put two lines under the small c. Such embellishments are only possible with handwriting; with a typewriter one must be satisfied with Mc.

It could be said that McLeod, being more attuned to the traditional Celtic mode of writing, is more correct than MacLeod. This claim is, however, not one made by either Professor McLeod or the writer, his father. We are content to observe that, in modern English usage, both are correct ways of writing the name, and that Mc is as orthographically acceptable as an abbreviation of Mac as is Mr (or Mr.) as an abbreviation of Mister.